Musical instruments are mostly used for entertainment purposes and in doing so they complement Ejagham arts and culture. In Ejagham, some of these instruments could also be used as a means of communication in both entertainment and non-entertainment circumstances to both the living and our ancestors. For example, during entertainment some instruments could be used to communicate direct or coded messages such as change of dance steps, increase or reduction of dancing pace, change of direction, instructions to go further or retreat and even to end the show. Of course these messages are only understood by those who understand the language of the instruments.

Similarly, in non-entertainment situations some instruments could be used to communicate information directly to the immediate or neighbouring communities. This was prevalent and effective when communities were small and the environment was less noisy. It is also used in communication during rituals and spiritual performances.

Okam is a skin covered Drum type instrument widely used in Ejagham. It is struck with the hand or stick to produce sound.

The skin is skilfully stretched over one open end of a wooden carved barrel shaped shell using a rope and wooden wedge mechanism. This makes it a Single-headed drum. Okam is the heartbeat of Ejagham music. The types vary in size and functionality.

The ropes are tensioned by the use wooden wedges around the barrel. Stretching the ropes further stretch the skin to produce the desired sound when struck. The skin of animals mostly used for drumheads include: Nyep – Crocodile, Nsu – Red Deer, Otunghinjock – Elephants Ears, Nkem –  Python skin, Ngungu – Antelope etc. 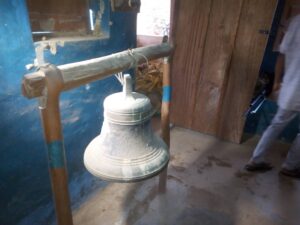 Egbung is a Bell type instrument made from cast bronze. Two types of egbung are common in Ejagham and both are associated with Mgbe, the Ejagham supreme governance institution. The more prominent is the one permanently located in Ocham (Mgbe Lodge). This egbung is typically gonged to summon Mgbe initiates for a specific purpose as well alert the community of an ongoing or upcoming event. The other egbung is donned on Mgbe masquerade during a performance.

Ajak is a Clapper type instrument. It is a basic form of percussion instrument which consist of two long indian bamboo, split and shaped for the purpose off striking one against the other producing a kpak, kpak, kpakpa kpak sound. Mostly used in Bikundi, Ngumba, Ekpa, Ache Nkup Abho anakae etc. 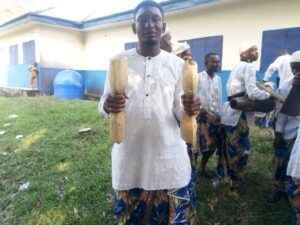 Morua is a Rattle type instrument used when performing chants, ballads etc. They are usually carved out of wood and could be decorated as desired.

Ekifung is single Bell type instrument made from forged iron. It is usually gonged with a soft wooden bamboo stick. 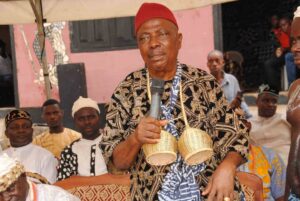 Akachak is a primary Shaker type instrument. Primary shaker type instruments are hand held and activated the shaking them directly by hand.  It is made out of calabash and dried cane rope skilfully woven to form a hand-held container. This container is then filled with dry seeds. The type of seed, quantity and size of the instrument determines the sound it produces. 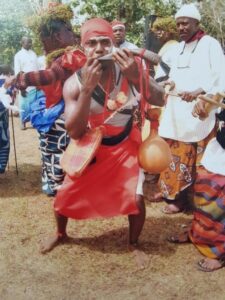 Ibang is a Horn type instrument. An Ejagham horn instrument is made from the horn of a giant antelope (Etonghayip ngungu). It is typically used to herald the appearance of a masquerade or dance group. 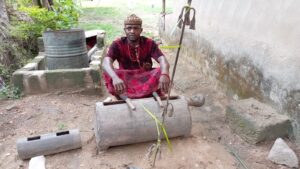 Eyuk is a Gong type instrument. It is made out of wood, dug out internally to form a cylindrical shell with apertures along the axis of the cylinder, to allow exit of air when struck with soft wooden sticks. Both ends of the cylinder are closed. 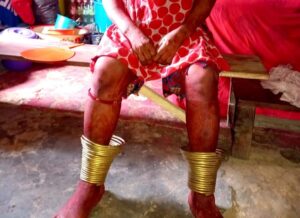 Agud is a secondary Shaker type instrument. They are worn on the ankles as shown and are activated by the performer. They are made from drawn bronze wire. It is worn by the performer until the grand finale performance. 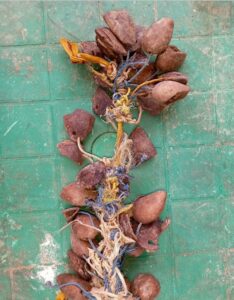 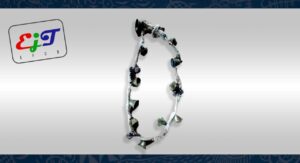 Ajore is a secondary Shaker type instrument. Secondary shaker instruments are worn on various parts of the body such as wrists, ankles and waist and are activated by the performers. They are available in different variety, sizes and materials such as bronze bells etc. They can also be strapped onto performer’s regalia as required.

Okangkang is a double Bell type instrument made from forged iron. It is usually gonged with a soft wooden bamboo stick. It is usually smaller that Ekifung. In Ejagham community, Okangkang is a symbol of adulthood. It is one of the items presented to Ekan (Age Grade) during the coming of age ceremony. It is usually domiciled in the home of Ntui Ekan, the Chief of the Age Grade.

Knowledge of Nature and the Universe